June 27, 2014
Changes in v1.723:
Added check for a function named “vlookupChildViewOrEditCallback” to detect open or edit of a child (in dialog only). Add a function with this name, and it will be called when the dialog closes.

April 21, 2014
Changes in v1.710:
If you leave all display names in the viewFields section empty, the header row will be hidden.

Please note that there are a number of changes in this version and there will most likely be a few new bugs. You should test it before adding it to a production environment. Let me know if you find a bug, and I’ll fix it as soon as I can manage.
Please note that you must index the columns you are querying to prevent errors when you reach a total of 5000 items in the list.

November 12. 2013
Changes in v1.631:
Child table max-height: changed overflow:scroll > overflow:auto to hide the scrollbar if it is not needed.

September 16. 2013
Changes in v1.56: Fixed a bug regarding showing documents located in sub folders in a document library.

This solution lets you create relationships between two or more lists based on for example a lookup column connection. You can list all children in the parent element (the children has a lookup column targeting the parent). This is not possible out of the box in SharePoint.

You can also have any kind of dynamic query based on values in the current form. You can for example pull in information from a list based on a selection in a choice column. Please note that this last example will not pull in this information on the fly when changing the selection, but when the form is loaded in DispForm, EditForm or in a list view.

This solution also lets you create new children from the parent (both DispForm, EditForm and in list views), and lets you auto-populate the “connection” to the parent element to ensure a connection.

Image from the GUI 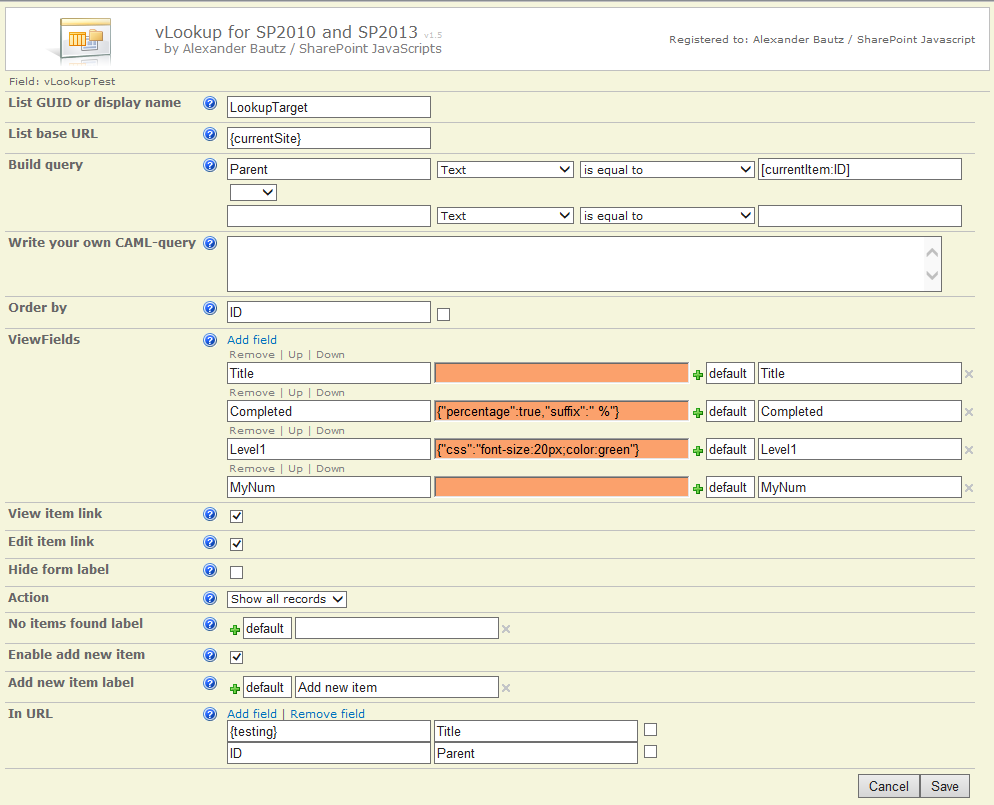 This one is done mainly for compatibility with the Dynamic Forms for SharePoint solution, but I have redone the code and also fixes a few bugs and adds some new features:

Used with the Dynamic Forms for SharePoint solution

Refer this solution in the CEWP where you set up the DFFS solution (DispForm and EditForm) like this:

Used as a standalone solution in forms or list views

To use this as a standalone solution, you must do the configuration in the CEWP code like this:

Please note that the setup must be MANUALLY triggered the first time. Set up the scripts, create the vLookup column and then – in DispForm – add this to the URL to create the list:
/Lists/mylist/DispForm.aspx?ID=[an existing ID in your list]&vLookupSetup=1

Refer the previous articles in this series for further details on the setup process.

Get the code for the file “vLookup.js” here.

How to remove the PayPal-logo / Unlicensed version from the GUI?

In this version I have added support for providing a license code for removing the PayPal-logo and displaying a “Registered to” text in stead. To obtain a license code, go to this page, scroll down to “Dynamic Forms for SharePoint / vLookup for SP201X” and follow the instructions.

As this is JavaScript, there is of course no problem to bypass this license code and manually remove the logo, but please remember that I put in a lot of hours developing these solutions, and I appreciate a few beers now and then.